It's been a better week this week, or I'm more able to deal with stress, Lens Guy built my new Greenhouse for me and I've had fun moving my plants from the house to the greenhouse. It came with a complicated automatic window opening vent which caused much cussing and head scratching and trying to read poor written  instructions. Middle son came to the rescue and now it is on and works. I came home from work, on the hottest day so far, hitting 21degrees which is very warm for Scotland, and it was wide open and magically as it got colder it closed. Simple things give me pleasure! I find it incredibly soothing to potter about with plants and seeds and then hopefully eat the results,of my pottering. 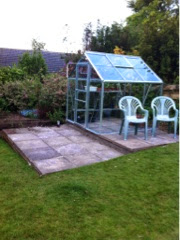 You need to imagine a beautiful wooden bench in front of the Greenhouse to replace the plastic chairs once budget allows. I tried to take a better photo and it began to rain... 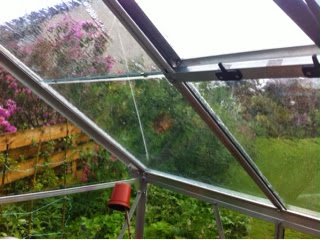 By this point Jaspar was looking at me as if I was very mad. 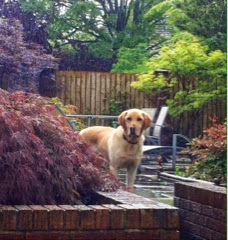 I have radishes, beet root, runner beans, sweet corn and peas sprouting and I have planted lots of lettuce,rocket, kale, garlic and spinach in the raised beds. In the greenhouse I have tomatoes, chillis, peppers, cornichons, aubergine, basil and coriander. When I asked Lens Guy what he would like me to grow he was against onions as he remembers them being too much work as a child but wanted lots of salad leaves and radishes. He is not convinced by the Curly Kale as he remembers feeding it to the sheep on the farm and the same with Turnips. For those that don't know, Lens Guy is my photographer husband, who grew up on a large farm in Dumfries and Galloway. He has mixed memories about living on a farm and used to entertain our children with stories of crashing the tractors (frequently) milking cows and herding sheep which surprised our city loving kids. A few years ago we were in the car with my in laws and our youngest daughter pointed to a hair bend turn on the road and loudly said, "That is where daddy crashed Nana's mini when he was taking Uncle Robin and Auntie Rachel to school." In the silence and shock that followed she realised that this had been a secret from Granny and Granpa.  We all have those.  My parents were very confused when they moved from our family home to find a collection of road cones, signs and other souvenirs collected by my irresponsible teenage self and younger brother. I had forgotten all about them, we probably blamed my youngest sister. 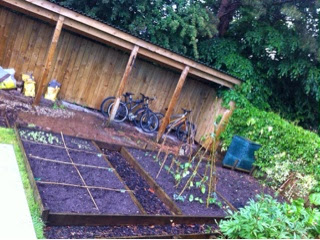 I have managed some sewing this week which always helps. I have completed two more Rose Stars. 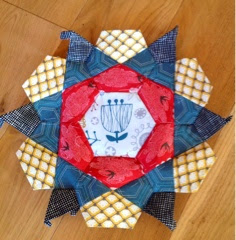 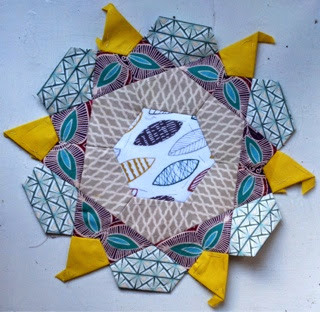 and have been working on my Sibling's Together quilt. I began this a long time ago when Lori Holt held her Bee in A Bonnet sewalong. I joined this to try and improve my skills and push myself and decided that this would be a quilt made from scraps for Sibling's Together. When everything ground to a halt last year it lay abandoned in my cupboard, until I took it out briefly last summer to piece the rows I had together and then abandoned it again as the rows were different lengths and needed some fixing.
Another reason was that the  Row along had finished and the instructions were no longer available and I had no more of the white background material. I had no idea what it was and attempts to buy more now means I have 3 types of white material. (I have learned from this and now hold onto receipts with descriptions of material in case I need to order more). when I organised my scraps I cut a whole lot of 2 1/2" squares and triangles using my Sizzix. I decided scrappy rows of squares would work and added then top and bottom. On IG it was suggested I try another flying geese row. I had some grey crosshatch by Carloyn Frielander and after some very dodgy maths and various mistakes I found this site for calculating geese. I made a few geese, losing some points along the way and some triangles to my needle plate, auditioned them and have now decided it just looks wrong with grey. I will try totally scrappy geese or another row of squares but need to get a move on as deadlines are looming. 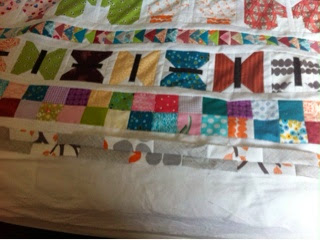 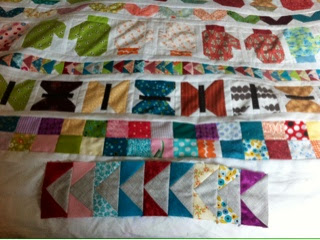 The geese seem to,grey as everything else has a white background 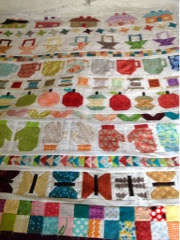 Perhaps leave and finish might be the best option.


I can then cross off another project of my WIP but it seems to be growing. I have to quilt my scrappy trip a long which is all basted but ignored as so big; make Lens Guy a quilt with solids and Tim Holt's Eclectic Elements; continue with mum's QAYG blocks; make something quilty for a friend's daughter heading to Uni in September that is gothic, quirky and probably Alexander Henry meets Harry Potter; make another EPP cushion for daughter as she loves the first one; learn to put in zips so I can make myself some bags; produce a baby quilt for a baby due in August; and on it goes but all fun and I'm not going to worry about deadlines.
Posted by salamanda at 21:43 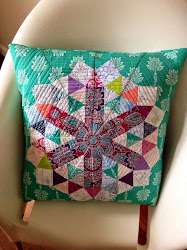